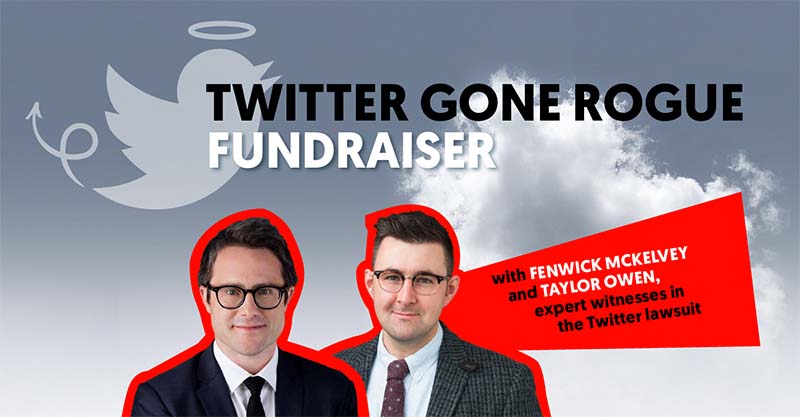 Get A Ticket. Watch the Film. Join the Podcast.

Watch a virtual viewing of The New Corporation film and support our lawsuit against Twitter for censoring the trailer. Then join us at 5 PM ET on January 27 as we live-tape the next episode of Joel Bakan’s Unfortunately Necessary Podcast featuring the filmmaker, lawyer & plaintiff host, our counsel Sujit Choudhry, and special guests Fenwick McKelvey and Taylor Owen, both expert witnesses in the upcoming court case.

The podcast will be moderated by Kat Dodds, Cool.World CEO, The New Corporation Impact Producer, and co-plaintiff. This promises to be a very lively and important conversation!

Host of the podcast Big Tech, Taylor Owen is the Beaverbrook Chair in Media, Ethics and Communications, and founding Director of the Center Media, Technology and Democracy in the Max Bell School of Public Policy at McGill University. Author of Disruptive Power: The Crisis of the State in the Digital Age, Taylor is the Co-Chair of The Canadian Commission on Democratic Expression with former Supreme Court Justice Beverley McLaughlin. Co-editor of The World Won’t Wait: Why Canada Needs to Rethink its Foreign Policies and Journalism After Snowden: The Future of the Free Press in the Surveillance State, his work focuses on the intersection of media, technology and public policy.

Amidst discussion of the Internet of Things, Fenwick McKelvey studies the Internet as Things, investigating the machines, bots, artificial intelligence, algorithms, and daemons that make up the digital world around us. A frequent commentator in the media, Fenwick has been featured on CBC’s Power and Politics and The National, The Guardian, and Wired Magazine, among others. He is the author of the award-winning Internet Daemons: Digital Communications Possessed, and co-author of The Permanent Campaign: New Media, New Politics. Fenwick is an Assistant Professor in Information and Communication Technology Policy in the Department of Communication Studies at Concordia University.

We are exciting to add these new ‘challengers’ to the lawsuit, and eager to hear their perspectives in the upcoming podcast taping on January 27th! Get your ticket (starting at $5), watch the film, and join the action.

You can learn more about our constitutional challenge against Twitter and the Canadian government, and more about Fenwick on his website, fenwickmckelvey.com, while Taylor can be found at taylorowen.com.