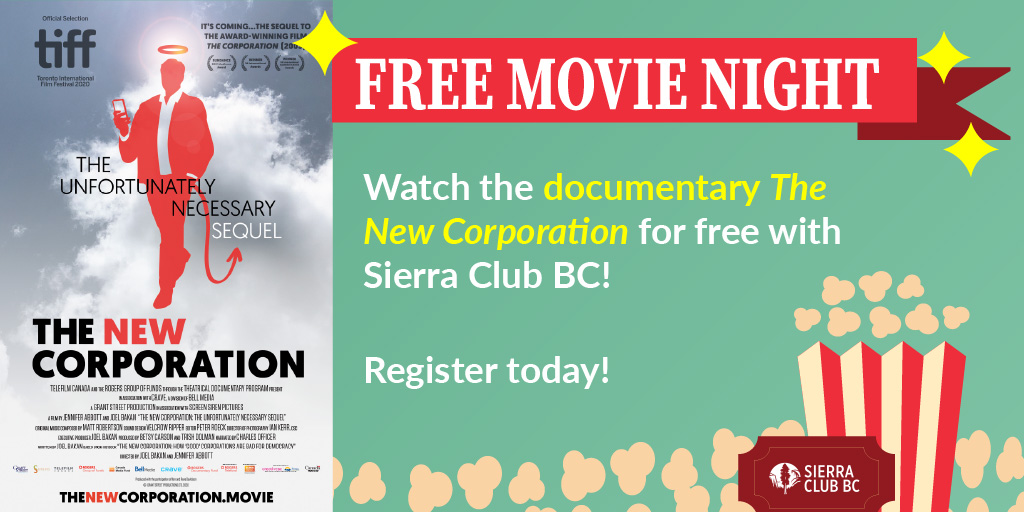 Last week Cool.World hosted one of our pilot community screening events through our platform, hosted by an organization – this time Sierra Club BC who screened The New Corporation: The Unfortunately Necessary Sequel.

In these COVID times, and for some time to come, these are virtual screenings, with the added “pivot virtue” of being able to convene in real-time a panel of people who may be physically distant but can come together in zoom-space (or some such platform) to have a conversation.

The film was available for a 72 hour window to those who registered for free, with many being encouraged to join in the co-viewing in the two hours just prior to the livestreamed panel.

For the Sierra Club event, this included activist and one of the subjects of the film Kshama Sawant, and one of the two directors* legal scholar Joel Bakan, who also authored the The New Corporation book, moderated by Anjali Appadurai (also featured in the film) who is Climate Justice lead for the Sierra Club BC. (*The New Corporation is directed by Jennifer Abbott and Joel Bakan.) 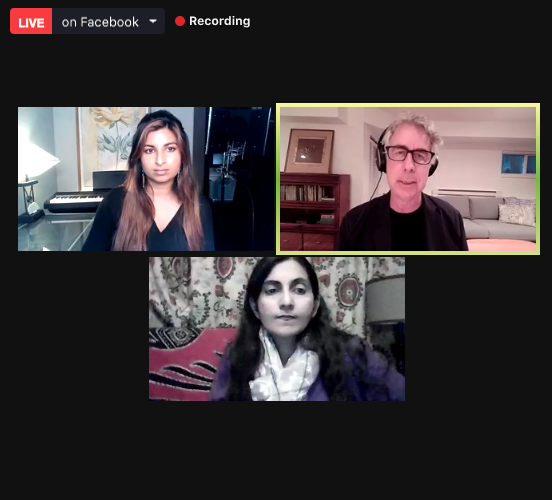 In light of the horrors unfolding internationally, acknowledged as the the panel started by moderator Anjali Appadurai in reference to the escalated violence against Palestinians by Israelis, the COVID tragedy unfolding in Modi’s India, and in general the heaviness of the news cycle – the process of hearing these three brilliant minds discussing the issues the film lays bare and which are – as the subtitle lays out – unfortunately necessary, was reminiscent of the energy we experienced during the launch of the prequel, i.e. exhilarating. The discussion was deep and lively. What I experienced was that activist pleasure I have been missing during this weirdly protracted launch of the film during COVID.

The Sierra Club communications team live-tweeted key moments from the film, and later from the panel making the experience even more engaging.

Here’s a snapshot of the conversation, as seen on Twitter #SCBCmovienight:

Anjali Appadurai kicked it off with the question: “The 2008 crisis was the result of corporate misconduct & reckless speculation. It nearly destroyed the global economy. Do you think the companies that caused the crisis deserved a $700 billion bailout? If not, what should have happened to those companies? Right answers only.”

Kshama Sawant: “Big business got the gov. to work for them & their gain is at our expense. During the pandemic millions of people lost their jobs, a trillion dollars of new wealth went to just 500 individuals. When we fight for workers it puts us in conflict with big business,” says @cmkshama adding: “It benefits capitalism to divide those that are oppressed. There is no hope of ending oppression without international solidarity that is multi-racial.”

Anand Giridharadas as quoted in the film: “(The pandemic) is not a crisis full of novelties, it’s a crisis full of revelation. It’s the same dynamic of the 2008 financial crisis bailout, where the most powerful gained power as a net result of bailouts, that is literally happening again.” @AnandWrites

The film points out a key tension: According to corporations, governments don’t know how to fix problems, so we should allow corporations to step in.

“The scale of these challenges is so big, and we feel so powerless & frustrated about the ability of our government to solve them, that we start to put our faith in corporations but by doing that, we’re going further down the path that led us here,” Stacy Mitchell (quoted from the film)

Joel Bakan: “The real problem is we are being schooled to believe there is no conflict and that corporations have ‘shared values,’ that they can solve #ClimateChange, that there are ‘win-win’ solutions. This is all to mask class conflict. We need to challenge that power,” @joelbakan

What is giving you hope?

“We don’t have to convince people that the system is not working for them. The problem lies in leadership. The left overall has to take its historical responsibility seriously and build unity on the ground with normal people,” says @cmkshama #SCBCmovienight

“We are seeing activists and uprising around the world. I believe that capitalism is very vulnerable at this moment. The myth that has sustained it is so out of synch with reality. When you are in those moments, things change,” @joelbakan

It ended too soon, and we need to do it again. Because there is more work to be done.

You can see the full recording of the panel on the Sierra Club Website.